Commuter Pal is a new iOS app that is aiming to take a different approach to a Londoner’s commute than other existing London Underground iOS apps.

Most of the current iOS apps that provide information for the London Underground are all pretty much the same. They have a status board, departure information, route planning and the a map of the tube. I’m not saying that these apps aren’t useful. In fact, some of them are really useful and I’ve relied upon one of them in particular for years. My problem with these apps is that they provide too much information.

The reality is that most commuters in London follow a pretty consistent route. In the morning they enter the network at one station, use the same two or three lines and exist the network at another location. In the evening they perform the same journey in reverse. I’d be willing to wager that this pattern applies to > 90% of London’s commuters.

Only the information pertinent to the route you take is shown. The button in the bottom right will let you reverse your route, so you can see the status for your journey home.

Swiping a cell to the right will give you more detailed status information about the line or station in question. 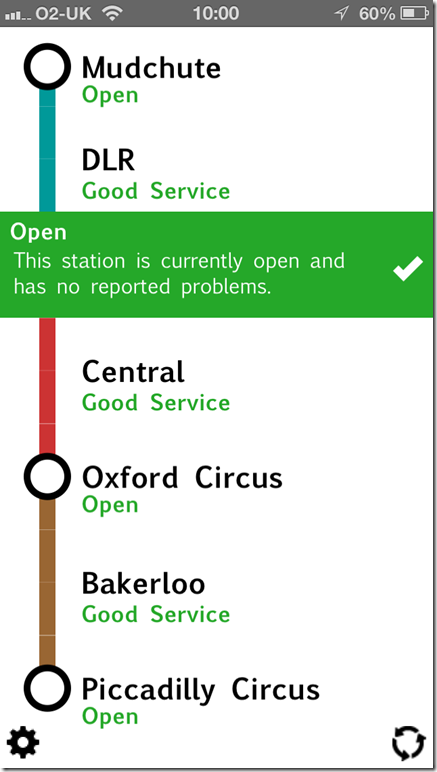 I’m also planning on adding departure information to the app, which can be access by swiping to the left. This will give you the departure times of the next trains from your chosen station.

I also want to add detailed push notifications of delays, as well as including buses, overground and National Rail trains into your journey.

The app is in beta at the moment, but I’m looking for more people to test it out. If you’re interested in taking a look, please visit http://commuterpal.cloudapp.net or sign up here http://tflig.ht/vTaR0n