As I’m home for Christmas, I like to curl up in front of the fire and do some learning. I’ve spend the last two days playing around with my iOS app Commuter Pal. More exactly Commuter Pal on the Apple Watch.

The idea behind CommuterPal is that rather than have a one size fits all Tube app (showing every line etc.), you get an app focused on just your daily journey and nothing else. I think this helps filter out some of the noise and gives you just what you need to know.

When Apple announced the Watch, I felt that the CommuterPal approach should translate very well to the Apple Watch concept.

It’s early days, but I think it’s coming along nicely. Ignore some of the UI elements as a graphic designer, I am not!

There have been a few challenges. I had to learn about App Groups so I can share the CoreData database. The WatchKit UI is very limited at this time too. And XCode 6.2 Beta is a bit buggy.

I hope to connect up some basic notifications next so you’ll get departures times and status information as you approach the station. You can decide whether to pick up the pace or take your time 🙂

UPDATE After some feedback, I was advised to try and keep the interface black, both for consistency and power consumption! 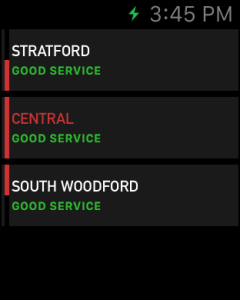