In my house, I have a water softener. This requires topping up with salt at varying intervals, depending on the usage. In the year I’ve been living here, I’ve forgotten twice. Whilst it’s not the end of the world, it does mean that we get some limescale build up on the taps and, more annoyingly, the shower head. I’ve tried a recurring calendar entry to remind me, but the reminds would happen pop up when I was at work, or out and about etc. By the time I got home, I’d forgotten about it. This sort of small annoyance was something I felt could be fixed with a overly complicated, time consuming, technological solution!

My water softener has a large compartment at the front, which you fill with salt tablets. Overtime, these get used up as the software regenerates itself.

I wanted a way to detect when the level of the salt had dropped to a low level.

How to measure the level?

My first pass at this problem involved using ultra sonic ranging device. I purchased a simple unit that was good for distances up to three metres. More than enough for my needs. To power this unit and make the necessary calculations, I chose a Raspberry Pi Zero, the latest entry to the Raspberry Pi Family. At about £9 it seemed like a good option to get me started on my first IoT project. To be honest, I bought one on a whim and needed to put it to work!

I connected it all up and, in testing, it worked very well. I went as far as to build a simple iOS app to display the current level (I even build a simple web page with SignalR!!!)  Unfortunately, it was useless when it came to the salt. Ultrasonic works best with flat surfaces and the top of the a pile of salt tables is anything but level! I thought about placing a piece of word or plastic on top of the pile, but this seemed like a hack. Okay, the whole thing is a hack, but I have to maintain some standards!

I went back to the web and started researching how people measure levels like this in real life, coal bunkers and whatnot. They use lasers. I didn’t want to spend any more money than absolutely necessary, so I would need a different approach.

The idea when struck me that I could use a reed switch (one that turns on in the presence of a magnetic field) and a wooden rod with a small magnet on it. The rod would rest of the pile of salt and move downwards, inching the magnet closer to the switch. On paper, this seemed like it would work, but in practice, I didn’t have enough space above the softener for the rod to protrude.

I then had another brainwave. Replace the rod with a piece of string and a weight! The effect was the same, but it didn’t require the space! Genius.

I put all the electronics into a water proof box and fed in the USB power cable. I added some LEDs to give me some idea it was working (green indicated my software was running and red indicated low salt). I moved the reed switch to the end of a piece of cable, so I could better position it. Some gorilla tape and a straw (to ensure the string moved unimpeded) and my contraption was complete!

I mounted the contraption onto my softener, replacing the lid. 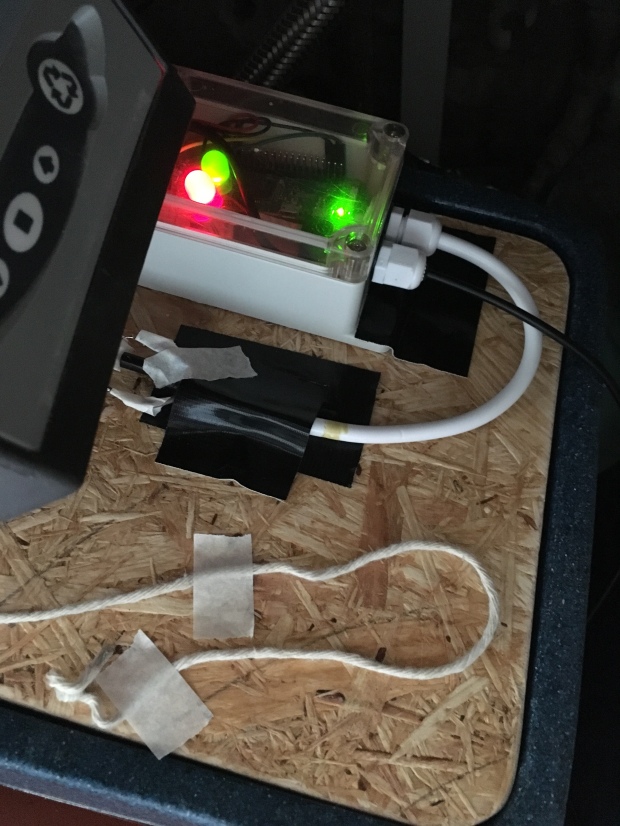 The software is designed to send me an alert once the salt runs low. As tempted as I was to write my own app and host a back end server, sanity prevailed and I just used IFTTT to raise an alert.

The contraption has been in place now for a few months (it’s taken me that long to write this bloody blog post!) and it’s not been a mixed bag. I’ve gotten one alert, which arrived at 3 in the morning. Another time, I just checked the softener on a whim to discover that the salt was low, but the string had snagged and got stuck. I freed it and a second later got the IFTTT alert. At least it proved my python script was reliable.

I’ve put some plastic on top of the wood to ensure the string never snags again and I’m expecting an alert in the next few weeks.

With version one in place and working, I’ve started thinking about version 2. These are the improvements I plan on making: