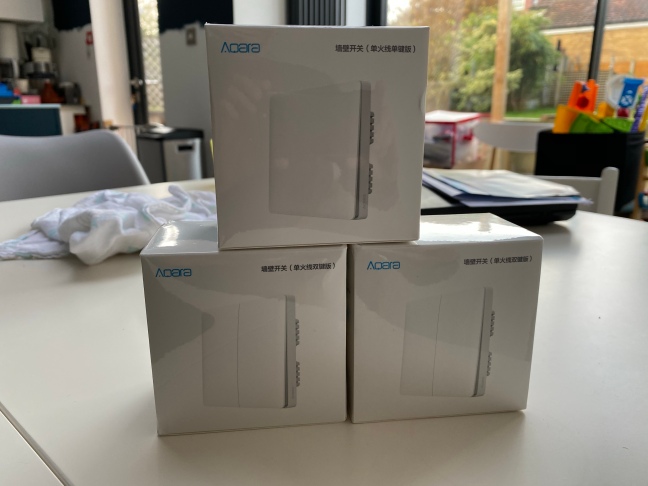 With news that Den Automation were likely going into administration (due to massive debt) and the discontinuation of their Cloud services, my dreams of adding more Den switches were well and truly dashed!

I’d added a few Aqara temp sensors and contact sensors to my Home Automation setup and I discovered that they had a property Wall Switch, one that claimed to work without a neutral wire. I’d ran into this limitation before with smart switches. I found a vendor on Aliexpress and ordered some. After some issues with packages being returned and duty being paid, they finally arrived.

I ordered a single gang and a pair of two-gang switches. Aside from everything being in Chinese (I think) they looked pretty solid.

On inspection of the individual units, I realised immediately there would be some issues.

First, there was the depth of the backing box. It was around 27mm, which I knew would be too deep for the boxes I my own house. I had the same problem with the Den switches, but they provided a spacer to compensate. These switches had no spacer.

The second problem was the two gang switches weren’t double pole, meaning the two way switches I had hoped to replace were out of bounds. I should have guessed this really. I had some other two gang switches in my house, which might be good candidates to replace.

WARNING! Please don’t attempt anything related to mains electricity unless your confident in your ability. Always remember to isolate circuits from the fuse board before doing anything!! I am not responsible if anything happens.

So, back to basics. Did they work? I turned to my trusty test rig!

Confident the switch actually work, I chose the downstairs toilet switch to replace. It was a single gang switch, which mirrored my test rig.

Amazingly, the switch did fit. Mostly down to the thickness of the wall plaster and the empty backing box.

I popped the cover back on and clicked it a few times to confirm it worked.

Adding to my Home Assistant

The scan for a new switch didn’t find anything. I tried it several times, resetting the Aqara switch over and over. It was only after I put my laptop down in frustration that I spotted lots of new entries under the “Lights” section!

Turns out it was treating them as Lights, but calling them Smart Plugs.

Not a big deal, but something to watch out for.

I synced Home Assistant and it popped up as a Plug.

I choose the toilet for another reason. My son is using the toilet now and, due to his height, or lack thereof, he has to shout for somebody to turn on the light.

I then took the opportunity to install Node-RED and to configure a simple flow. When the event from the button is detected, it will turn on the switch above for three minutes.

It’s a nice bit of hardware. I’m a little mystified about how it *actually* it works. I’ve read that it only works with dimmable bulbs, so I guess it doesn’t actually every disconnect the circuit. It’s reliable and switches pretty quickly. It doesn’t suffer the same limitation as the Den Automation switches, which can only be switched once every minute.

The outdoor lights might be an option, but I haven’t opened up the switch to take a look.

All in all, it seems like a pretty solid offering. The depth of the switch is certainly an issue and the lack of a supplied spacer might result in you having to mix and match with some off the shelf ones, which isn’t ideal.

Aqara also do a battery version in the same style, so you can mix and match. I’ve picked a few of them up too and I’m hoping to use them in conjunction with some Shelly 1 relays to swap out the two way switches.