Tempus Fugit. As a developer, one of the things that causes me to stress the most, is a simple lack of time.

I have so many ideas (mostly useless) floating around in my head that I would like to turn into reality. I have three apps in the App Store, which I don’t really update. I also have a day job.

Faced with so many things to do, I really struggle to focus. I can lock in on something for a week or two, but a customer email will arrive, or a new idea will pop into my head, and my priorities change, leaving something half done.

This excellent Commit Strip is basically my product range – http://www.commitstrip.com/en/2014/11/25/west-side-project-story/ 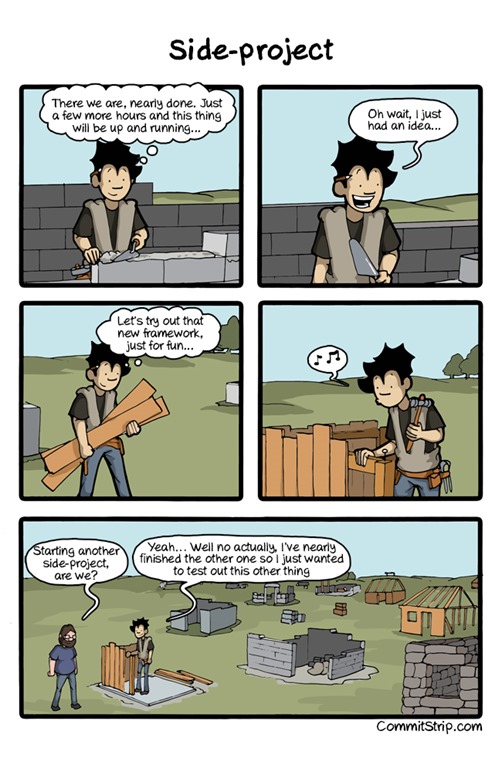 My iOS app, Roomr, is a good example of this.

What started out as a simple app for viewing the availablility of meeting rooms morphed into something more complicated, but which wasn’t *more* useful. I kept reacting to user’s feature requests, without keeping an eye on the growing complexity. Complexity, I said to myself, is natural as a product evolves.

Roomr doesn’t make much money. I’ve sold a few thousand units over the years, which I’m very thankful for, but it’s never actually been worth my time. Rather than maintaining that app, I’d have been better building an app for somebody else and getting paid.

It took me a long time to accept this simple truth.

Uncontrolled feature creep is the biggest issue I face.

I recently had a user state, in an email, that if I added feature X, they’d buy ten units of the app. I knew it would take me 20+ hours to implement this and that ten sales hardly covered 1/2 an hour of my time, but I went ahead anyway, knowing full well, that I’d probably never see a return on this investment. I justified it by saying “if I add feature X, more people will buy it”.

The fact of the matter is, it won’t make a blind bit of difference. I’ve had this request from two or three other users in the past three years.

Another justification for adding complexity is that by adding feature X, a large company will buy many, many licenses i.e. £££ for me. Again, reailty has taught me otherwise. I’ve had large multinationals inquire about the app and large scale deployments, but none of them ever made a purchase, despite many changes. An app with just one developer behind it, presents too much risk for companies, which I understand.

I’ve come to realise that, when you’re on your own building apps, simplicity is probably best. My iOS apps, Roomr and Peopler started with a very narrow focus on doing one thing and doing it well. Somewhere along the road, I lost focus on that. Sure, it was fun and interesting working on the complex stuff, but in the end, I think my nerves and customers, suffered.

I had planned on Roomr 4.0 being more complex than the previous versions, but I think it’s time to start ripping stuff out and making the app more focused than before. I’m also going to try ad support. If I can generate more revenue, it will be easier for me to update the apps.

This will, I suspect, upset some existing customers, but I would rather try a new approach, then kill the app off completely.

I’ve been experimenting with the DayView control I created for Roomr and Peopler and today I added the ability the add an appointment with touch. This mimics the behaviour of the native iOS calendar app.

You hold your find on the calendar for a second or two and an appointment appears. You can then drag up and down to position the appointment. This is a very early demo, but it seems to work pretty well.

Whilst Peopler isn’t exactly being downloaded in the millions, I’ve received *actual* feedback from users, which shows they are a) using the app and b) interested enough to email me!

One feature, which I’ve wanted to add for a while, is the ability to view the future availability of your favourites. It’s all fine being able to see a person’s availability today, but what about tomorrow or the day after? To sort this, I’ve started building a Day Picker into Peopler. 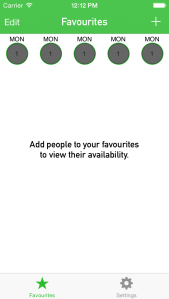 This was an early mockup I did,  so I could see how a horizontal date picker would work. I’ve seen this horizontal pickers and like the look of them. After some coding, I ended up with something like this. 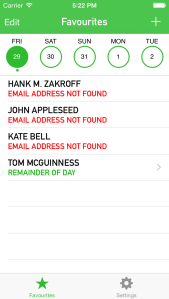 You can see five days in advance, scrolling right will show you up to thirty days. This is an iPhone 5 screen size and I suspect the iPhone 6 will probably show 6 or 7 days. I need to experiment with this a little to ensure the auto layout works. Anyway…I digress. You can see that I’m free for the Remainder of the day. When I select a day in the future, it goes a bit wrong 🙂 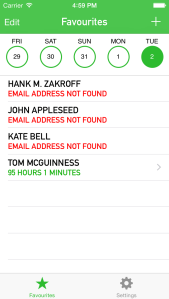 My “availability” algorithm works off the current time and isn’t factoring in the fact that we’re dealing days in the future. This was actually a good thing as it made me realise that showing availability in this way is pointless for any date in the future. My initial feeling is that availability might be better expressed in number of appointments and actual free time.

I need to think on this a little as working hours will factor into this too. No point in telling you that somebody have seven hours free if that time is beween 5pm and midnight!

For the next release, version 1.2.0, I might just add the day picker into the schedule view. If you have any thoughts on this, I’d love to hear them!

After more than one rejection by Apple, Peopler has now been approved for sale. If you want to check people’s calendars in MS Exchange without needing Outlook or messing with Shared Calendars, Peopler might be what you’re looking for! It’s free to download and can be upgraded using an In-App Purchase if you like it.

I spent some time over the weekend tweaking the UI for Peopler. I think this version looks a little clearer and more distinct. I’ve also added a new feedback page to this version and I’m keen to see whether this makes a difference. 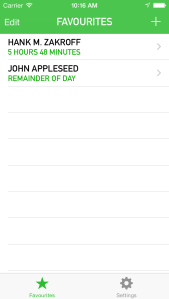 Peopler lets you view the calendar’s of other people using Microsoft Exchange. You don’t need shared calendars or anything complicated, just the person’s email address.

Peopler is available to buy in the App Store https://itunes.apple.com/us/app/peopler-pro-check-availability/id954158903?ls=1&mt=8

This new version, with the updated UI, should be approved within the week!